It's official ... Stranded on Sparrow is here! I am excited to share my new book in the independence Islands series with you. To help celebrate, the authors in the series are all sharing our idea of the perfect unconventional date. Scroll down to read story about an unconventional date and to find out more about Stranded on Sparrow. Also, there is a blog tour going on all this week you can participate in, with a chance to win some great prizes. I'm looking forward to seeing you on the tour!

My Idea of the Perfect Unconventional Date... 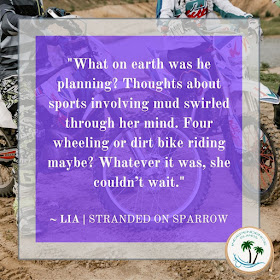 Zach Nolan hasn't had time to date in years, since taking on the role of a single dad. So, when he starts to fall for outspoken and adventurous Lia, some unconventional dates are in order. I don't want to give too much of the story away, but you'll find out what original and humorous dates he thinks up in Stranded on Sparrow.
When my husband and I were dating we went on a lot of dates I'd consider unconventional. For example, our very first date was a picnic at the park on an unseasonably warm day in February. We did go on some traditional dinner and a movie dates, but besides those, parks around the area became our favorite places to be. We'd walk trails and even went biking one time...even though I accidently ran into a tree once! That's a story for another blog post. :)
One of my favorite unconventional dates was the time we went with some friends four-wheeling. It had rained a few days before and so there were plenty of mud puddles. It was fun splashing through them and watching the mud fly everywhere. When it was my turn to drive, I came up with a crazy idea to drive through the granddaddy of all mud puddles. Once reaching the middle of the puddle the water rushed around our legs and I realized it was much deeper than I thought. I had gotten us stuck in the middle. I trudged through the mud back to the edge of the trail and my future husband was able to retrieve the mud caked four-wheeler out of the mud. I was so embarrassed I'd gotten us into such a mess. However, in the end we were able to laugh about the whole ordeal. We returned to my friend's house covered in mud but smiling. It was a fun and adventurous date.
Have you ever been on an unconventional date? I'd love to hear about it in the comments!
More About Stranded on Sparrow...

If His eye is on the sparrow, where does that leave her?

Lia Diaz’s life has become an illusion. Fired from her perfect job, she’s living a lie to avoid censure from her critical family. So when Lia gets a call about her nana’s recent fall, she heads to Nana’s house to help out and regroup.

Things are looking up until she discovers that her childhood refuge, Nana’s home on Sparrow Island, has been condemned in the wake of Hurricane Arley. Time to regroup—again. 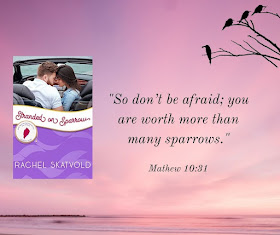 Getting stranded on Sparrow Island while visiting the house was not in those revised plans.

After “rescuing” his niece and a motley crew of animals, some might say Zachary Nolan has a hero complex. Zachary never thought that he would live life as a single dad. However, as a web designer he is able to spend lots of time with Violet, and he wouldn’t have it any other way. A call for help when Lia gets stranded there sends him rushing to the rescue. That hero complex thing again.

A hero and his niece offer new hope to Lia—maybe God’s eye is on Sparrow Island after all.

Read the next Sparrow Island novel in the Independence Islands Series featuring five islands, six authors, and a boatload of happily-ever-afters.