The release for Bookers on the Rocks by Chautona Havig is this week! To celebrate, all the authors in the Independence Islands Series thought it would be fun to share some of our best marriage advice. Read mine below and don't forget to check out the other posts in the blog tour! Please enter in the giveaways, too! 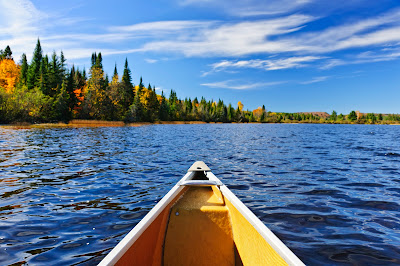 What Canoeing Taught Me About Marriage...
Of all places to learn something new about my marriage, I never thought it would be on a Niangua River canoe trip.
About four years ago, when my sister invited us to go on a camping and canoe trip with her family in the Ozarks, I was excited for a fun weekend getaway. My oldest, then about six was thrilled about the prospect of a canoe ride while my youngest, about three and scared of water, wasn't enthused at all. However, after a while he calmed down and fell asleep in the canoe, but that's another story.
I sat in the front, while my husband sat in the back, with the kids in the middle. Not canoeing for several years, we were in for quite a learning curve. At first we were all over the river, trying to stay in a straight line. We were actually working against each other without realizing it.
When we reached the rapids, I would see an obstacle and try paddling as much as I could to avoid it and thinking my husband saw the obstacle too, but my paddles had little impact in the front of the canoe. As a result we'd end up going sideways or end up stuck on a rock. It didn't take long for us to become frustrated with each other. It wasn't until we started communicating that we were able to keep the canoe straight. I had the best view from the front, so when an obstacle came, it was my job to tell my husband in the back so he could make the wide turn to avoid it. At the end of our trip, I couldn't help thinking canoeing was almost like marriage counseling. We had to learn to communicate effectively to make it down the river successfully.
Being an introvert, communicating has never been my strong suit, however in a marriage it's vital. I used to keep my concerns bottled up inside, afraid of causing an argument or undue stress on my spouse. However, I learned talking to my husband about things helped our marriage to bloom. The crazy thing is, there is always something new to learn about him, even though we've been married for thirteen years. Talking things out, even if I'm worried it might cause a disagreement is worth it, because we learn more about each other and as a result our relationship becomes deeper and stronger. Communication really is one of the keys to a happy marriage...and occasionally maybe a weekend canoe trip. 😀
A little more about Bookers on the Rocks...

If it ain’t broke, why’s she so intent on fixing it?

For twenty-five years, Tessa Booker has insisted that romance is something Hollywood cooked up to sell books and movies. Yes, she knows the word existed before movies.  She doesn’t care. That’s her story, and she’s sticking to it.

So when Ross gets a gentle nudge from Mallory Barrows to look into what Tessa’s doing every day while he’s at work, he discovers a romance in the works–one that sounds a little too “ripped from the pages” of his life!

Who is this woman, and what has she done with his wife?

Armed with advice from 101 Ways to Romance Your Wife and a copy of the manuscript he printed while she was napping, he’s determined to figure out what’s up with his wife… and if maybe a little romance wouldn’t be a good thing after all.

In a twist of the “on the rocks trope,” this book introduces the next island in the Independence Islands Series featuring five islands, six authors, and a boatload of happily-ever-afters. 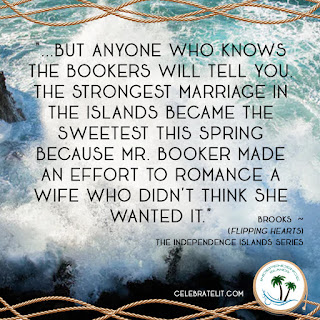 Giveaway!
Follow the Tour for More Chances to Win.

Posted by Rachel Skatvold at 2:02 PM