It's release week for Flipping Hearts! This new Independence Island book by Chautona Havig takes place after a hurricane. The main characters are fixing up houses on the islands. To celebrate this new release, all the authors of the series are sharing some of our most memorable DIY projects. I will be talking about mine below. Please find out more about Flipping Hearts below, follow the tour this week to read the other authors' posts and don't forget to enter in the fun giveaways! 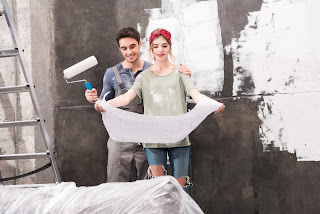 Having purchased a fixer-upper home about four years ago, the subject of DIY projects is very familiar. Before moving, we remodeled the kitchen of our old home DIY style to help it sell quicker. The new cabinets looked so nice, I wish we could have taken the kitchen with us to our new house.
When we started looking for a home, we knew that the location mattered most to us. My husband and I wanted a place on a few acres in the country with room for our kids to grow. When we moved in, all the bedrooms had only the baseboards, the tile in the kitchen and bathroom were badly cracked, and some other things needed updating as well. However, we are definitely a DIY type of family. As long as the bones of the house were good, we could live with the other things for a while and gradually start making improvements.
After hiring someone to install carpets, the rest of the things we took on ourselves. We painted walls that needed it, I sewed curtains for the windows, my husband bought and installed new locks for the doors. We put rugs over the cracks in the kitchen and bathroom floors until replacing them last year. We also did some landscaping on the outside of the house, with the help of one of my husband's friends.
Over the next few years there are some more projects I'd like to work on, including replacing the backsplash and counters in the kitchen. After the experience, I think the key to renovating a fixer-upper is to take your time and work on things as you can afford them.
About the Book:

When a hurricane rips through Hooper Island, a tidal wave of TV crews follows and upsets the locals.

Brooks Crawforth agreed to volunteer crews helping to clean up and repair things on the island, not a whole home and garden series on the total renovation of several houses and a bit of cleanup on the side. He’s furious, and the show host is spitting nails at the person who blew it in the first place.

His and his father’s jobs are in jeopardy, the islanders are about to kill him, and that crazy show host blames him for her assistant’s last-minute, “you’ve-got-to-sign-this-now-or-we-can’t-come” contract.

One more thing. Did she have to be so cute?

He’s got even more trouble, though. Islanders are starting to blame Mallory Barrows for the invasion. Not only that, there are rumors of dismantling the association and allowing tourism on the islands. How’s he supposed to fix this mess?

They can’t stand each other, but if they can manage to flip off the enemy switch and flip on some cooperation, maybe their hearts’ll get flipped, too.

This “enemies to romance” novel introduces the next island in the Independence Islands Series featuring five islands, six authors, and a boatload of happily-ever-afters. 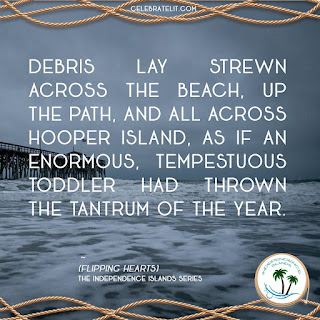