I'm so excited to announce it's release week for Seasoned Grace by Melissa Wardwell! This story is about a daughter in search of her estranged father. There are many storms along the journey--both spiritual and from nature that must be overcome? Have you ever been through a storm that tested your faith? This week all the Independence Islands authors are talking about our experiences with storms where God's grace showed through at the end. Please scroll down to read mine below. :)  Also, don't forget to follow the other others this week and enter in the giveaways! Blessings.

The storm came out of nowhere. As a young teen in the middle seat of my parents van, my heart pounded as I watched rain pelting the windshield and felt the wind rushing against the side of the car. Tornado warnings blared on the radio, but we were on the highway with no safe place to pull over. When an exit finally came up, my dad was able to pull off and we all breathed a sigh of relief. God had protected us. As we drove toward somewhere safe to ride out the storm, the sight out the window took my breath away. The sky was split in half--one side with dark menacing clouds with lightning streaking through, and the other with sunshine and a stunning rainbow. It felt like a promise that God would keep us safe.
The experience from my childhood remind me of the verse from Psalm 91:1-2. "He who dwells in the shelter of the Most High will abide in the shadow of the Almighty. I will say to the LORD, My refuge and my fortress, my God, in whom I trust."
Whenever I go through storms in life, I can always rely on God's protection. Even when my time runs out here on earth, I can rest assured He is preparing a home for me in heaven where I'll live with him in safety and peace forever.
More about Seasoned Grace

You can run from your past, but you can’t escape it.

Though he disappeared that day, Raylin McReynolds never believed her father died at the World Trade Center on 9/11.

So, when a mysterious letter arrives from Breakers Head, informing her that she would find him on the Independence Islands off the coast of Georgia, she has no choice but to find a job, get there, find her father.

As mainland troubles encroach on Hooper Island, Sean Anderson devises a plan and presents it to the island pastors and his cousin, Scott. The result: Grace Mission—a place where those struggling can find the help they need.

What he didn’t need was a distraction in the form of a newcomer to the islands—a mission volunteer, no less.

Others at the mission, Beth and Scott, see more than just frustration brew between Raylin and Sean. What will it take to convince Sean and Raylin to stop bickering long enough to see what’s obvious to everyone else?

Raylin’s on a mission to find her father and protect her heart, but neither seem willing to cooperate. 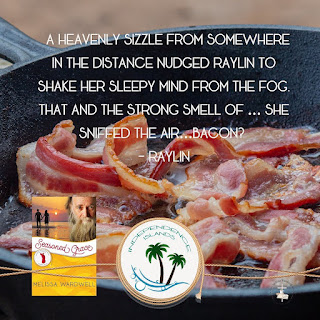