I'm excited to announce the release of Blended Lives by my friend, Melissa Wardwell. This is the next installment in the multi-author Independence Islands Series, set on Sparrow Island. To celebrate, all the authors are sharing how they found their wedding dress. Look below for my wedding dress story. Also, please don't forget to sign up for the giveaway and follow all the stops on the tour this week!

I met my husband-to-be in 2006 through mutual friends at church. Our first date was a picnic at a park. Afterward we took a walk on a trail around a pond. I was a very shy person who rarely went on dates but talking with John felt natural. He was sweet, funny and a good listener. We both loved animals and spending time outside. After our date, I realized he was someone very special. Only eight months later we were engaged. 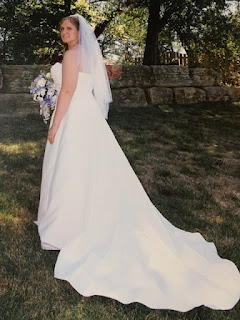 As our August wedding approached, I started dress shopping online to look at styles. I was set against trying on any strapless dresses because I didn't think they would look good on me. At first, I fell in love with a dress with cap sleeves. My mom went with me to the bridal store during a sale and we found the dress to try on. I also picked two more, including a strapless because it was in my size and I loved beading design on the dress. I thought maybe I could add sleeves if I really loved it. 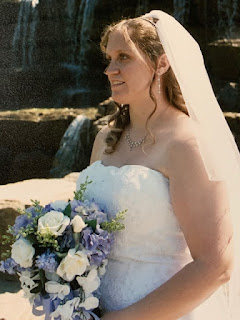 To my surprise, when I tried on my pick from online, I didn't like it at all. However, I loved the strapless dress so much that after trying on all the dresses I'd picked out, I tried it on one more time. Looking at myself in the mirror, I could only smile. It was my dress. Now, I think I didn't really know what I wanted until I actually tried the dresses on. If I hadn't been willing to step outside the box and try out something new, I never would have found the perfect dress for me. Now my husband and I have been married 14 years. I'm so glad God brought us together. 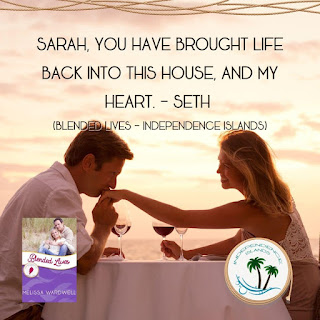 Wedding bells are ringing on the islands, but more than romance is in the air.

Seth Mikels experienced a fulfilling marriage with his wife until her sudden death left him alone to raise their two daughters. As they approach their teens, it’s obvious that they need a woman’s influence. He’s not looking for love, but he could use the partnership of a wife. Between his handyman business and playing Mr. Mom, time is fading fast.

Sarah Reid has spent the last four years caught in the middle of one island drama after another. Following the most recent fiasco, she hopes to find refuge on Sparrow Island with her two little boys. Climbing bills and a dwindling bank account leaves her no choice but to sell out and move to the mainland. Enter Seth’s handyman skills and an unexpected romance.

With Beth and Scott planning their own Merriweather wedding (complete with a Momzilla), will wedding bells ring out on Sparrow, too?

Enter in the Giveaway

Posted by Rachel Skatvold at 1:07 AM