From Shore to Shore Release Fun

I'm excited to announce the next installment in the Independence Islands Series, From Shore to Shore by Tabitha Bouldin is here! To celebrate, all the authors in the series are sharing our favorite memories near the ocean. Scroll down to hear my favorite ocean memory. Also, don't forget to follow the other stops on the tour this week and enter for a chance to win the giveaway!

My Favorite Ocean Memory...
Growing up with an airline mechanic for a father, my family had the perk of discounted standby flight tickets. Because of this, even though we lived far away from the ocean in the Midwest, we had the opportunity to travel longer distances for family vacations. The only drawbacks were, we had to wake up super early to catch a standby flight, sometimes we would have to sit apart from each other, or risk becoming stranded in the airport if the flight happened to be full. However, for the most party, it was fun traveling places that would have been too expensive otherwise.
We traveled often to visit my uncle and his family in North Carolina. We also went to Arizona, Colorado and California, among other places. However, my favorite vacation was our trip to Hawaii. During our trip we were able to go snorkeling in Hunauma Bay. I felt nervous at first and paranoid about sharks but seeing all the underwater sea life around the reef turned out to be a wonderful experience I'll never forget. Some of the fish were so curious they would come right up to our masks and bump into it with their mouths. The parrot fish were my favorite because of their rainbow of colors. Later on, in a different part of the island we also saw sea turtles resting on the beach. Someday I would love to return to Hawaii so my kids can enjoy the wonderful sights and experiences too.
More About the Book...

Can one captain show her the deep love of the ultimate Captain without falling in love himself?

Bree Jamison comes to Sparrow Island for one reason: to study coral reefs. She's not interested in happily-ever-after and certainly won’t allow her handsome boat captain to sway her into believing these islands are different from any others. But when she finds an old shipwreck and learns the history of pirates and treasure, Bree finds herself searching for something that always feels just out of reach.

Cooper Carmichael takes the job as boat captain for the enigmatic Bree to further his career. He never expected her to be so driven—or so painfully opposed to God. 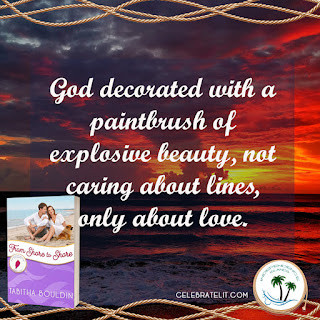 All Cooper wants is his happy island life. He wants for nothing. In fact, he's made it his mission to be content. In every aspect of his life. Bree throws a wrench in his plan as her presence pushes Cooper to want for things he deems unnecessary.

A man striving for contentment. A woman who believes God is picking on her.

It takes one to show the other that no matter which shore you find yourself on, God got there first.

Read the next Sparrow Island novel in the Independence Islands Series featuring five islands, six authors, and a boatload of happily-ever-afters.